Sleddall Alms Houses and chapel Aynam Road Kendal Cumbria
The Victorian alms houses can be found on the East banks of the River Kent next to Aynam Road. They were built in 1887, with the impressive name of " The Selddall Victoria Jubilee Alms Houses" under the auspices of a celebration of Queen Victoria's Golden Jubilee. 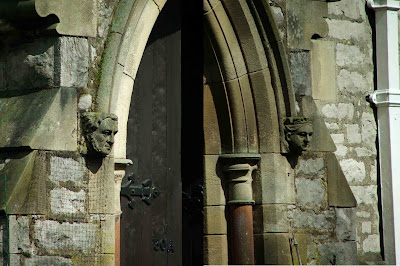 View of the chapel's doorway, with 'gargoyles' representing Queen Victoria and Albert.
Local tradition has us believe, that John Sleddall originally intended to build his alms houses in New Hutton, but when he paid a visit to the vicar to discuss how best to go about his intended bequest, he was kept waiting for so long that he eventually decided to endow his charity upon Kendal. Johns' choice of Kendal was quite fitting really....his ancestor, Thomas Sleddall has been Kendal's first mayor in 1636. 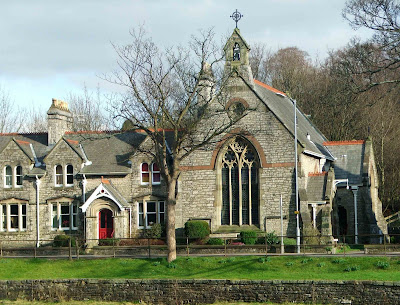 The building cost a grand total of £4250....all of which was paid for by Thomas Sleddall. He also granted an endowment of £17500 which it was hoped would provide an income of around 12 shillings a week for each of the alms houses' residents.

The chapel, seen in the photo above on the right hand side of the alms houses....was used for a Men's bible class as well as regular services and addresses. Together with All Hallows church on Fellside, all the seats were free...at a time when many seats in the Parish church in Kirkland were still being rented out. It is reported that the chapel here on Aynam Road, and the church on Fellside were very well attended for this reason. Services were held at the chapel on Mondays, Wednesdays and Fridays at 5pm, Tuesdays and Thursdays with addresses at 6.30pm. 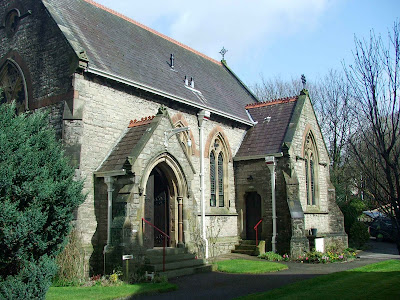 In 1986, the chapel was converted into two dwellings and opened by Lady Graham of Netherby, Wife of the Lord Lieutenant of Cumbria. The chapel can be seen from the footpath on Aynam Road, and also from the canal path that runs behind it. Please don't trespass on the driveway.
Posted by The Cumbrian Castle listing. at 20:53