Holy Trinty has a great variety of stained glass windows....maybe not as old as some of the Cumbria churches visited to date....but none the less, the windows are stunning when the right light is cast through them.
The Yeates window dates from 1865 and is a memoriam to John Yeates and his wife Margaretta. The window can be found at the South West corner of the church, just inside the door. The window was made by Warringtons of London. 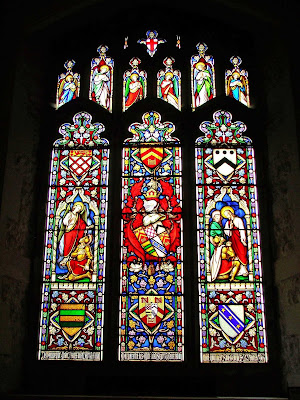 The Wakefield Lilly Window is best viewed when the sun is shining on the South side of the church. The greens in the glass give it an almost 'underwater' quality. Dating from 1924, it is dedicated to the memory of Mary Wakefield, wife of E.W. Wakefield. It was made to a design by Mrs Alice Gordon, and was produced by Shrigley and Hunt of Lancaster. It can be found at the South West corner of the church. 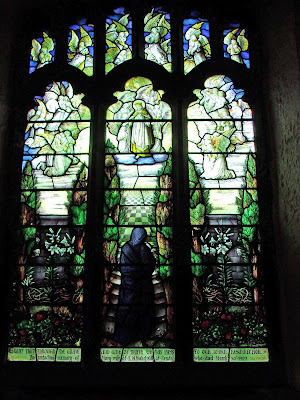 The Chambre Window dates from 1852, and is dedicated to Alan Chambre and his son. Alan and his son are thought to have been direct descendants of John de Camera, the Chamberlain of Kendal Castle sometime around 1230. The window was made by Warrington of London, and can be found at the South West corner of the church. 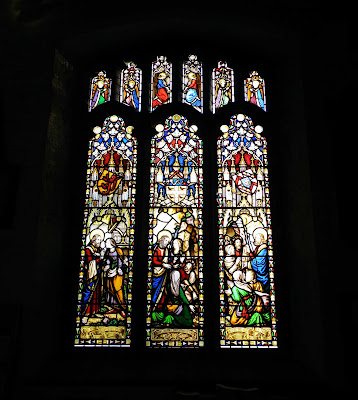 The Braithwaite window can be found at the North West corner of the church. It dates from 1875, and was erected in memory of the Reverend George Braithwaite M.A. 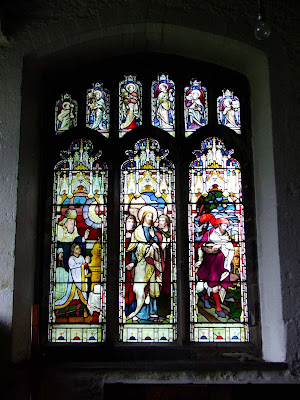 The Barnes window is very interesting. The detail shown below, shows a view of the parish church with the Reverend Joseph Watkins Barnes M.A. to whom it is dedicated, praying in front of it. Joseph was largely responsible for the restoration work that took place during the 1850's. He was vicar here at Holy Trinty from 1844 until 1858 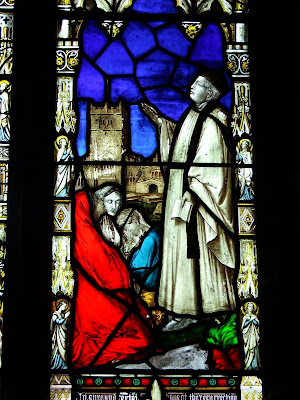 The window can be found on the West wall of the church....just to the right of the tower. It was made in 1858. 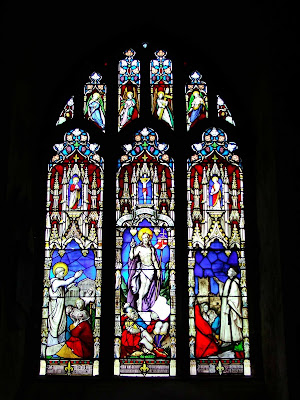 The Baptistery window can be found at the South West corner of the church, just inside the door. It dates to 1853, and was erected to the memory of William Robinson. This window was produced by Warrington of London. 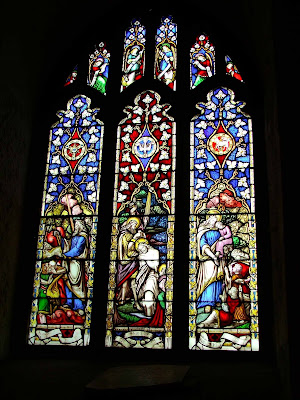 The other windows in the church are still to be photographed. As soon as they are added to the library, I'll post them to the blog.
Posted by The Cumbrian Castle listing. at 21:04

That ia great that you have taken these photos. I own State of the Art, Inc Stained Glass Studio. I often photograph stained glass windows in churches -- just I like stained glass. One of the churches that I had photographed burned. Since I had good photos, the church will be able to have "their" windows rebuilt based on my photos. I like to get a distance shots and close ups that have details like exact names on the memorial plates. You can see some of my photos on Flickr.com. Search for my name.

Great photos! Thanks for sharing them.