Fountains Abbey lays about three miles South West of Ripon in North Yorkshire, on the North banks of the River Skell. Founded in 1132, Fountains is one of the largest Cistercian abbey in England. The foundation of the abbey came about after a group of monks from St Mary's of York, opted for a harsher, more disciplined way of life. They were exiled from York because of their 'reformist views' and taken into the protection of Thurstan, Archbishop of York. Thurstan provided the monks with land near to his manor at Ripon, and they began to build and farm on land on the banks of the river Skell. The thirteen monks were welcomed into the Cistercian order in 1132, but it appears that not all went to plan. Money was in short supply, and on several occasions it looked as if the new settlement would have to be abandoned....until some wealthy benefactors contributed finances to the monks. By the late 12th century, the monks at Fountains Abbey held huge swathes of land in many areas.

View of the abbey from the West. The Guesthouse complex can be seen at the right of this photo.

The building of the abbey began in earnest between 1132 and 1134, with stone buildings replacing the original wooden structures. Remains of some of these early timber buildings were unearthed during recent excavations. Today, the remains at Fountains, are amongst the most important ecclesiastical ruins anywhere in the world, and the valley in which the abbey sits, has been classified as a World Heritage Site. The remains that can be seen today, consist of the oldest surviving Cistercian water mill, the 12th century West range of buildings, the 16th century tower built by Marmaduke Huby, two guest wings and a host of other buildings. 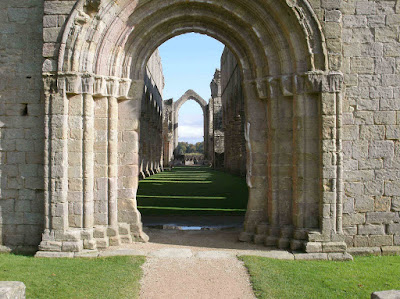 The above photo shows a view down the nave.

This is an excellent resource for all things Fountain Abbey...from photos to documents about the abbey's history and its eventual demise.

The abbey was occupied for nearly four hundred years, until Henry VIII's dissolution of the monasteries in 1539...when the lands and the wealth that the Cistercians had built over this long successful period of time, was handed to the Crown. The deed surrendering the abbey and its contents to the Crown, was signed on the 26th of November 1539...and it appears that the order to vacate and surrender was carried out almost immediately. The abbey lands, totalling some 500 acres, were sold on the 1st of October 1540, to Sir Richard Gresham, one time Lord Mayor of London, merchant and supplier of velvets, arras and satins to Henry VIII. 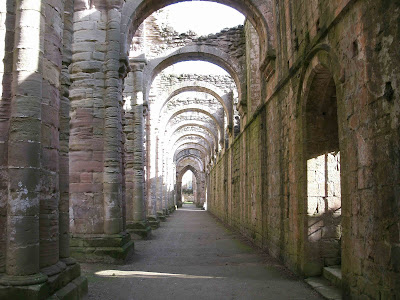 An inventory of the abbey, valued its wealth at a staggering £1115 18s 2d, making it by far and away the riches Cistercian abbey in the whole of England. Other items included vast amounts of gold and silver, bejeweled mitres and plate and chalices, as well as holy relics including a piece of the true cross of Jesus. The lead from the abbey's roofs would also have been highly sought after. The buildings at Fountains were initially spared the demolition that had befallen other monasteries and abbeys, as Henry had intended Fountains to become the new Bishopric which would have extended over Richmondshire. As it was though, the new Bishopric was eventually based at Chester. In 1540, Henry ordered Sir Richard Gresham, the new owner of the abbey and its lands, to make the abbey's buildings uninhabitable so that no new religious orders could establish themselves there. All the timber buildings and finely decorated wooden screens were burned in furnaces specially built on sight for this task, all the glass was removed from the windows, with the lead being melted down along with that from the roofs and pipes. Some of the glass from Fountains mysteriously found its way to York and Ripon, where it is preserved to this day.

This is the link to the Fountains Abbey website, and includes details of the parks and lands surrounding the abbey today. 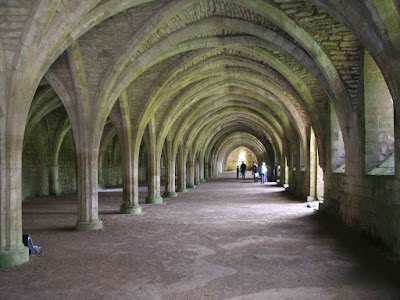 The above photo shows a view looking down the Cellarium, where food was stored.

The monks from Fountains, now without a home and a job, were either pensioned off or offered jobs elsewhere, with the abbot, Marmaduke Bradley, receiving a yearly income of £22 plus a single payment of £100...a considerable amount of money in the 16th century.

Today, the abbey is a favourite of school field trips, offering hours of exploration. Photos courtesy of Charles Jeffries.

Posted by The Cumbrian Castle listing. at 18:50

Nice site, good to see someone completing the churches of Cumbria.
Nice infomration and well put together. Would like to link to your site contact me via www.leicestershirechurches.co.uk.
I cannot see your email address.