There are two grave slabs shown in the following photo...mounted in the floor of the sanctuary. There is actually another one here, but it is out of shot. The slab to the right of the photo, is about four by two feet. Carved in red sandstone, it bears a relief carving of a cross with fleur-de-lys terminals with a ring around the centre of the cross head. It bears a prominent stepped cross base (hidden beneath the chair) and has a sword carved next to the cross shaft. This slab probably dates from the late 14th or early 15th century. 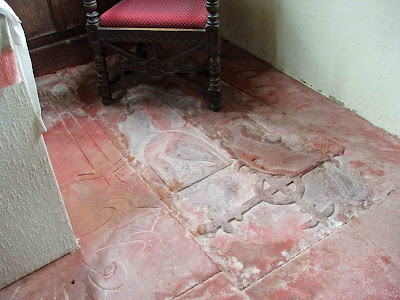 Laying next to it, and partially hidden beneath the alter table, the next slab bears a cross with broad and very rough fleur-de-lys terminals...again rising from a stepped base (not shown here), and also with a sword at its side.
Posted by The Cumbrian Castle listing. at 21:32