Hidden away behind more modern buildings, St Stephen at Kirkby Stephen is well worth a visit. The church is a huge, mostly Victorian building, with a tower dating from around 1506. There are a number of interesting artifacts within the church. The first item, shown below, is a stone coffin, found during excavations for a heating chamber in 1950. Consolidated and set safely to one side, it is possible that it dates from the middle to late 12th century. 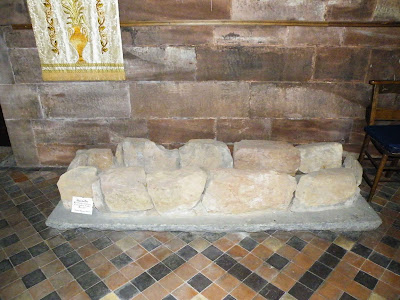 Probably one of the most curious stones in my photographic collection, is the Loki Stone. Philip Coppens tells us that this stone is unique in British churches, and that only two of this type still exist in the whole of Europe. See his website It is thought to date from around the 8th century, and was originally housed in the grave yard outside. It appears to depict a horned devil\demon, shackled at the wrists and ankles, and stands around three feet tall. 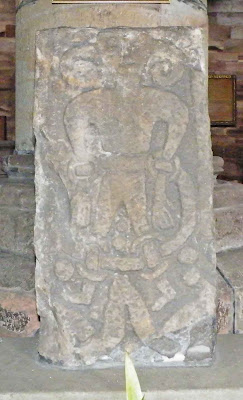 The final photo, shows the only grave slab to be found at St Stephens. It is a rectangular red sandstone slab, and is said to be the tomb of Sir Thomas de Musgrave. 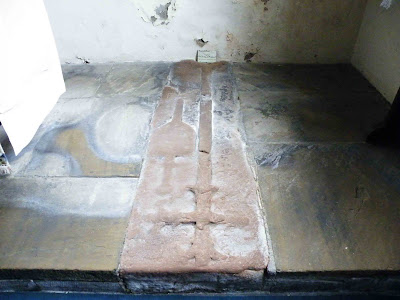 As can be seen, it is quite badly worn, but the design can still be made out. It shows a straight arm cross with fleur de lys terminals on a stepped base. To the left of the cross's shaft, a sword and a small shield can be seen. It probably dates from 1376, when Sir Thomas died. An engraving of the slab, dated to the late 1800's, shows the shield with the coat of arms of the Lowther family, though this seems to have been worn off.
Posted by The Cumbrian Castle listing. at 21:23