Waberthwaite is a tiny collection of farm houses situated about fifteen miles North of Millom on the A595, and three miles South of Muncaster Castle. English Heritage indicate that the Grade II listed building probably has 13th century origins...although what parts of the church represent this early stage of the church's history is difficult to say. Mike Salter in his 'The Old Parish Churches of Cumbria' states that the West end of this single chambered church probably dates from the 15th century, whilst the extension at the East end of the church dates from the 18th century. The church possibly hasn't always been dedicated to St John the Evangelist....a deed dated 1392, makes mention of the church of St James....whether or not this mention represents this church is difficult to say! 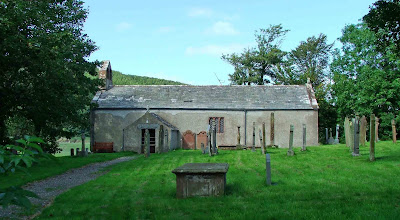 The church is a single chambered building....chancel and nave share the same space with no dividing arches or screens. The walls are bare of any memorials, the only wall mounted items being the two large wooden tablets either side of the alter in the East end of the church. They are shown below. The board on the left shows the Apostle's Creed and the Lords Prayer, whilst the board on the right shows the Ten Commandments. These boards probably date from sometime in the 16th century...apologies for the flash....the lacquered covering didn't allow for good photos!! 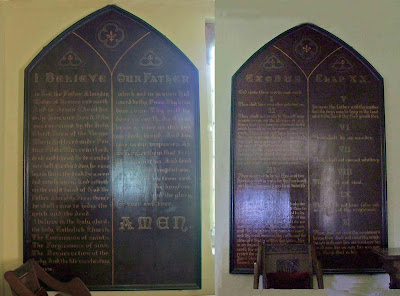 The bell, shown below, can be found on the window sill of the West window. Dating from 1882, it was originally housed in St Luke's Chapel, demolished and replaced with Waberthwaite Church of England School at Lane End, about half a mile to the South West. St John's has a small bell cote with two bells hung in it...both dating from the late 15th century. One bell has an inscription reading "St James Sir Thomas Walker". This dedication probably indicates that the bell originated in the church of St James, mentioned above, wherever that may have been...or that the original dedication of the church was indeed to St James. The 'Sir Thomas Walker' part of the inscription, relates to Thomas Walker, rector of the church from 1439 to sometime after 1473. The second bell bears the inscription "King Henry VI". The connection between the bell and the church here are Waberthwaite is a little obscure....King Henry VI sought refuge in Muncaster Castle as he and his wife Margaret fled North to Scotland in 1461, after his defeat at the battle of Towton near York. Maybe it was donated by the King as a thank you for the his safe haven at the castle. The two bells are housed in a small bellcote, which was inserted into the West wall of the church in 1796. This new addition cost £14 and 10 shillings. 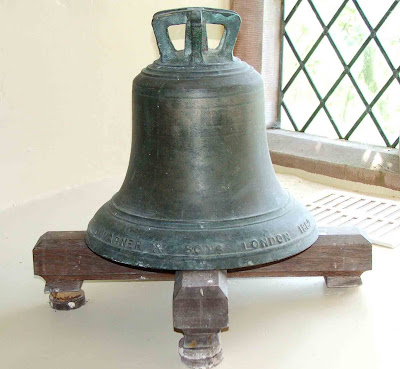 As at Underbarrow, the original gas lamps still hang in the church, though these look as if they've been converted to electrical lights. There is a single hatchment here, representing the coats of arms of George III and dating from 1778. 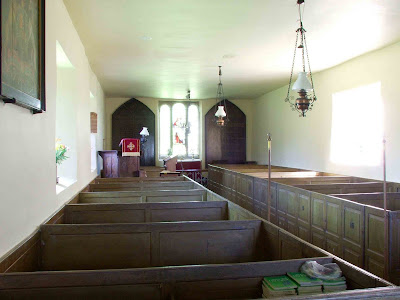 The box pews, shown in the photos above and below, probably date from around 1807. Before this, seating probably consisted of benches against the walls. A meeting of the church council resolved to "flag, pew and ceil" the church...resulting in the work of 1807. A budget of £66 was put aside for the work. It is lucky that St John's has retained its box pews, as many churches have since replaced them with the 'newer' style bench seats. 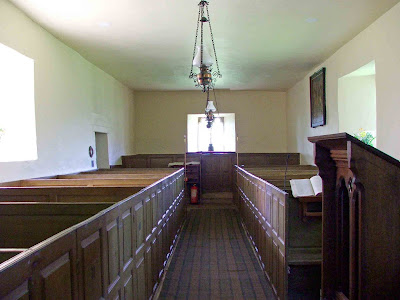 The church's font lays at the rear of the church, to the left of the photo above. It is thought that the font, is formed from the base of a Roman pillar. It is made of black sandstone (?) 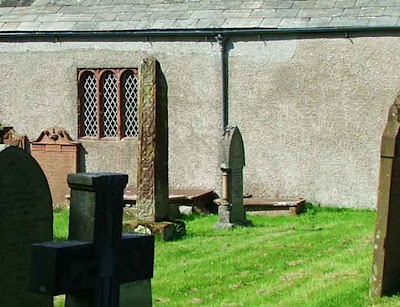 The church possesses two fragments of preaching crosses...one mounted upright in the church yard, and the other laying at the foot of the sundial (behind the cross fragment shown above) See this link for a good view of both items:

Both pieces of stone work probably date from between 850 and 1000AD. The standing stone is well preserved on its North and South faces...the East and West faces are quite badly eroded, possibly due to weather. The stone laying at the foot of the sundial is badly eroded due to the fact that served as the threshold stone in the porch...so for countless years has endured the wear and tear of many feet as they entered and left the church. The standing stone, incidentally, was also incorporated into the porch at some point, but as a lintel. Both stones were 'liberated' in 1855 when the porch was rebuilt. At this time, a large socket stone was found in the church yard, and as it fitted the larger of the two cross fragments, it was decided to mount this one standing up. This church is definitely worth a visit. The location is stunning...with the River Esk running a few feet behind the church, and the drive along the West coast here is breathtaking. The church seems to be left unlocked and there is ample parking nearby.
Posted by The Cumbrian Castle listing. at 18:09