The church of St Andrew at Penrith, is a fascinating building....possibly starting out life as a  church with a thick walled, defensive tower and then being extended over the years until it became the beautiful Victorian church we see today. The building is littered with architectural gems, including effigies, grave slabs and pre-conquest grave stones. The two effigies shown below, can be found at the head of the stair case in the tower. 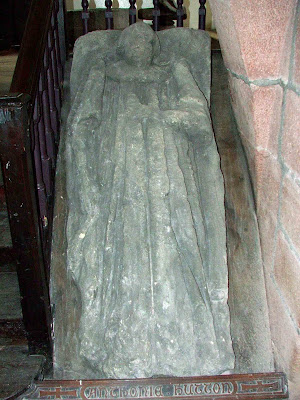 Above. Effigy of Anthony Hutton, dating from sometime after his death in 1637

The effigy above, represents Anthony Hutton of nearby Hutton Hall in Penrith. He was Master in Chancery, and died in 1637. When he died, his wife Elizabeth had the two effigies made, and placed in the North Choir of the church right next to the family pews. Elizabeth survived her husband by 36 years....it must have been a little strange sitting next to her memorial every time she visited church!

The two effigies are made from tufa stone commonly found around Conisbrough near Doncaster in South Yorkshire. When they were in their original location in the church, they were protected by an iron grill bearing an inscription that read: "Her lies interred Anthony Hutton Esq. who was a grave, faithful and judicious Counsellor at Law, and one of the Masters of the High Court of Chancery, son and heir of that renowned Sir William Hutton, of Penrith, and was matched in to the noble family of Sir Thomas Burdett of Bramcourt, in the county of Warwick, Baronet , by the marriage of his vertuous sister Elizabeth Burdett, whose pious care and religious bounty hath erected the marble tomb to perpetuate the memory of such a worthy Commonwealth man, and so dear a husband, who died the 10th day of July, 1637" 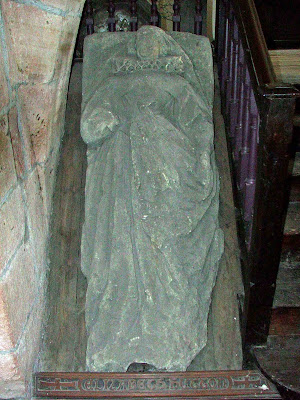 Above. Effigy of Elizabeth Hutton, again, dating from sometime around 1637


Beneath her own tomb and effigy, the memorial read: "Here lyes the Portraiture of Elizabeth Hutton, the wife of the lately deceased Anthony Hutton, who, through living, desired thus to be placed in token of her union with him, interred, and of her own expected mortality"  In 1722, whilst the church was being rebuilt, the effigies were removed to Hutton Hall for safe keeping. They were then taken to Nunwick Hall at Great Salkeld where they suffered mutilation at the hands of unknown vandals. They then found their way to Great Salkeld church in 1894, and finally back to St Andrews in 1897, when they were housed in the gallery overlooking the tower staircase.

St Andrew's collection of pre-conquest crosses and hog-back stones has to be one of the most well known in the county of Cumbria. There are two crosses, both intact but for their cross heads, and four hog-back tomb stones. The carvings on each of the stones are in good condition, despite their age and the fact that they've been subject to countless harsh Cumbrian winters. 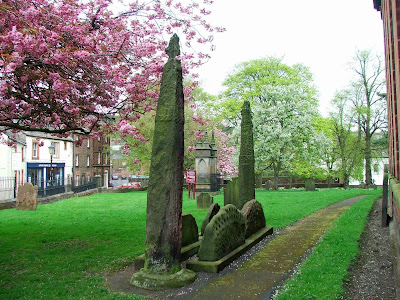 Above. The Giant's Grave.

The crosses are both around eleven feet tall, and stand at either end of the Giant's Grave, with the hog-back stones placed between them. The cross shafts and the hog back stones all date from slightly different periods. The oldest of the two cross shafts dates from sometime around 950AD, whilst the other dates from around 1000 AD. The hog back stones all date from around 950 AD. Local tradition has it that during the 17th century, the grave was opened, and the bones of a warrior with his broad sword were discovered buried beneath the stones. There seems to be no information indicating what became of this discovery.

The grave is no longer in its original position, having been moved and re-aligned with the church during the 1887 restoration. At this time, the cross shafts and the hog back stones were all re-mounted on new plinths. In 1722, when the church was undergoing a major rebuild, the church wardens decided that the grave should be broken up and discarded.....however, and luckily for us!! the population of Penrith were in uproar at the desecration of this ancient monument. Some of the hog back stones did suffer some damage at this point in time though, and the metal strips holding a couple of the stones together bear witness to this attempt at destroying the grave. 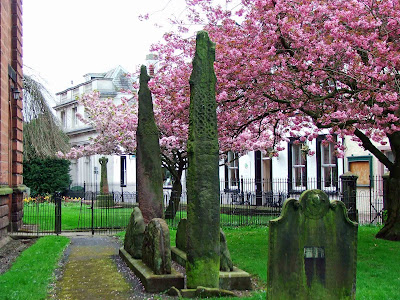 Of the four hog-back stones, the one shown below is probably the best preserved. The carvings are still fairly fresh and clear, despite the obvious repairs that have been carried out. 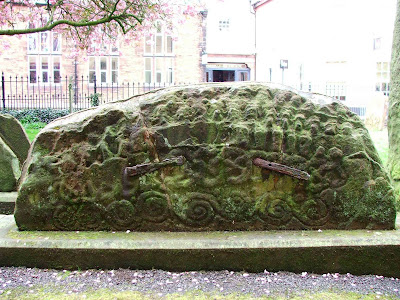 The stone shown below is a little more weather worn, but even so, the carvings are still in good condition. 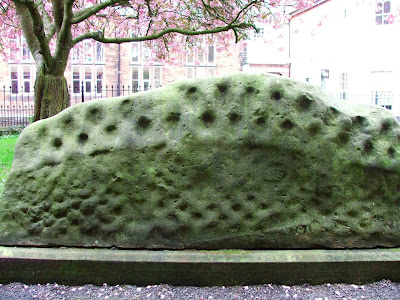 The next stone, shown below, is now smooth with no remains of any carvings left. 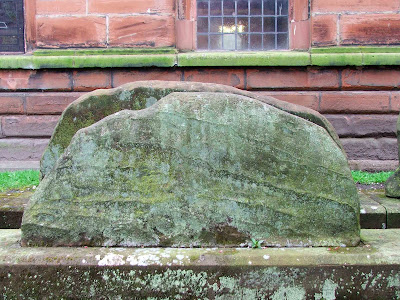 And finally....this stone looks as if it may have lost some of its 'top-curve' and has had some significant repairs done to it. Despite this though, the carvings are just and so visible. 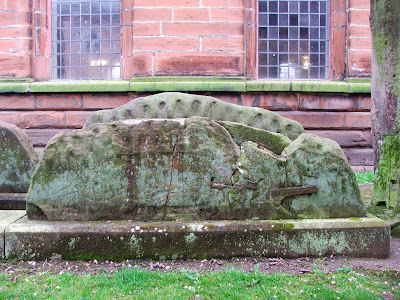 A good view, below, of the Giant's Grave. 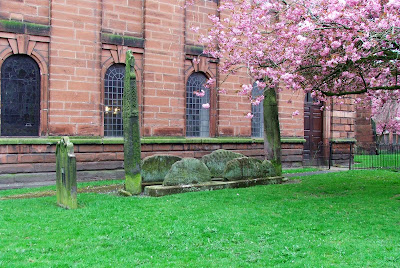 Another good view of the Giant's Grave. The Giant's Grave is said, local tradition would have us believe, to be the last resting place of Owen Caesarius, King of Cumbria from 920 to 937AD. The hog-back stones are said to represent wild boar that King Owen killed in nearby Inglewood Forest. 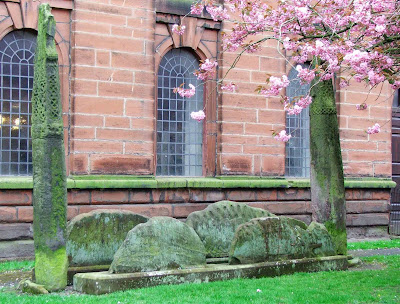 The grave slab shown below, can be found in the porch (if I remember rightly!?) and is carved from very coarse almost white sandstone. The photo doesn't do it much justice I'm afraid, but the cross head depicted here combines a ring head with bracelet forms all within a circle from which four leaves project outwards. The cross shaft has stylised leaves on either side. This slab most likely dates from the late 12th century. 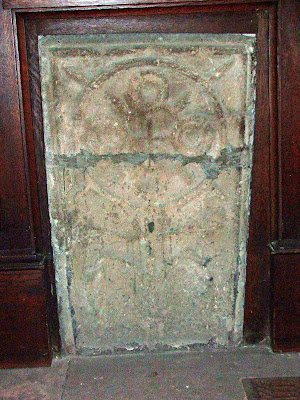 
The slab shown below probably dates from the 14th century, and has most likely been used as a door threshold at some point. The chamfer on the left hand side of the slab, along with the large amount of wear and tear on the left also, points to the stone bearing a large amount of use. 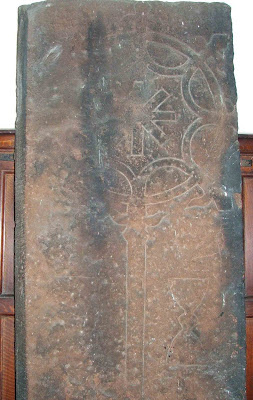 
The design on this slab, shows a cross with an eight armed ring head with fleur-de-lys terminals, with a separate eight armed rosette type pattern in the centre. The emblem seen on the right of the slab is probably a chalice, with an unidentified rectangular emblem on the left hand side just and so visible. The chalice was a symbol used to indicate that the burial was that of a priest. The base has been so badly worn as to be almost smooth and devoid of any pattern.
Posted by The Cumbrian Castle listing. at 21:38