This tiny church with its over sized chancel, sits behind Newbiggin Hall, a spectacular collection of red sandstone towers and buildings, and was probably the manorial chapel here. 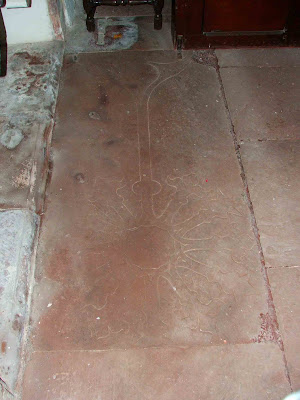 The grave slab shown above, is set in the chancel floor, and is extremely badly worn. The stone has probably been turned around at some point, as the most worn side is now facing the wall. The incised design shows an elaborate cross head with twelve arms, the terminals of which alternate between fleur-de-lys and angular trefoils. This slab probably dates from the latter half of the 14th century.
Posted by The Cumbrian Castle listing. at 21:34