Some great fragments here at Tunstall church. A small collection of broken grave slabs near the tower, and this fascinating Roman votive stone. The stone was originally found at Burrow nearby, where there was a Roman fort. It was removed from the fort by the Reverend Richard Rauthmell in the 18th century. It was the mounted into the left jamb of the most Eastern window of the North aisle during the 1907 period of restoration. For some bizarre reason though, it was mounted on its side....I've flipped the image so that it's easy to see. 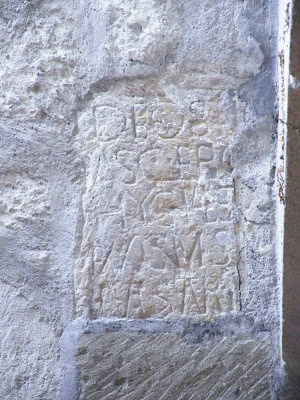 The stone contains a dedication to Aesculepius, the Roman\Pagan god of medicine, and also to Hygeia, goddess of healing. 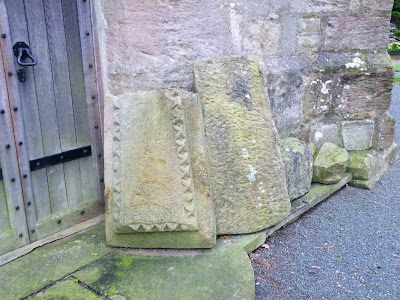 The photo above and the one below, show a small collection of stonework that can be found at the foot of the tower. The two larger stones in the top photo are obviously grave slabs, but I'm unable to date them. 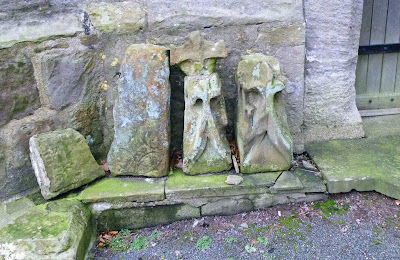 The two left hand stones in the the photo above are probably the remains of broken grave slabs, again, undated, whilst the other two to the right of the photo, look like broken finials from the top of the tower.
Posted by The Cumbrian Castle listing. at 21:42